Whoa! It’s been a long time since I began this blog. Report cards were completed, my classroom was packed up and moved home (I will be at a new school come September), and the school year wrapped itself up. I will definitely miss my students and friends at the previous school, but look forward to the upcoming school year – in due time of course.

I have digressed enough. The end of June is a busy time in this family not only because it’s the end of the school year, but my mom and brother also celebrate their birthdays. This here is a card that I made for my brother: 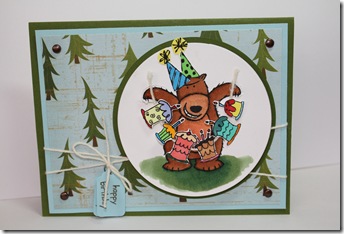 I used the bear stamp from SU’s “Under the Stars” set, along with another retired set (for the birthday cakes. I coloured each birthday cake and then used my zip dry glue to adhere them to the string. Then I actually cut out his arms like so: 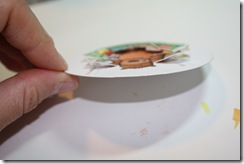 and just pulled them forward a bit. I cut out a second circle and glued it in behind so the green cardstock can’t be seen under his arms. I used more of the zip dry to glue the rope to the bear’s paws. The hats were from some random stamp set I had. This is my first real attempt at taking photos while creating my cards and clearly I need some more work on it, but I have all summer for that! :) Have a great day and thanks for stopping by!

Email ThisBlogThis!Share to TwitterShare to FacebookShare to Pinterest
Labels: Birthday, Copics, Stampin' Up

Steph
Ontario, Canada
I am a very blessed wife and mother of 2 amazing children and 1 fur baby. I'm a teacher by day and a crafting enthusiast in any time I have left over.